NIS America sent ADG a tip on new release assets and information about the unit classes for the upcoming RPG, Grand Kingdom, which will be hitting PS4 and Vita on June 21 in North America and June 17 in Europe. Brand new screenshots and character images are here and the game’s website contains a whole new section on unit classes. Grand Kingdom’s upcoming release will also be including the Noble class, which was DLC in Japan, with every copy of Grand Kingdom. 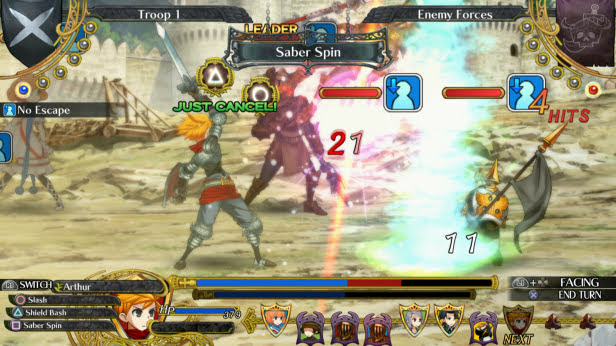 There are three basic class types that operate on a bit of a ‘rock-paper-scissors’ mechanic: Melee, Ranged, and Magic units. In addition to these unit types, there are also Specialist units that fulfill very specific roles in battle.

Melee units are characterized by their high attack and defense, and specialize in close combat. They also have the ability to Guard, which negates all damage up to a certain point. Melee units have low magic defense, so caution is recommended when facing enemy Magic units.

Ranged units can attack from anywhere on the battlefield. With their extended attack range, they can disrupt enemies at the back of the formation who are charging magical attacks. However, Ranged units have low defense, so it’s important to position them such that can’t be dragged into close combat.

Magic units have medium attack range, and use ranged attacks that can affect multiple enemies. Some of their more powerful skills must be charged before they can be used, leaving them vulnerable to disruption from an enemy’s ranged attack.

Specialist units don’t quite fit into any of the other three roles in battle. These units have individualized abilities that can be a great asset in battle, but their specialized nature affords little room for flexibility

Discover more about each of the units and their role on their website or new blog post.

I’m looking forward to this especially with my new found love of RPG and anime. I will keep you guys posted for more information as it comes available.